Do you know about medical importance of “red eyes effect” in the photos? 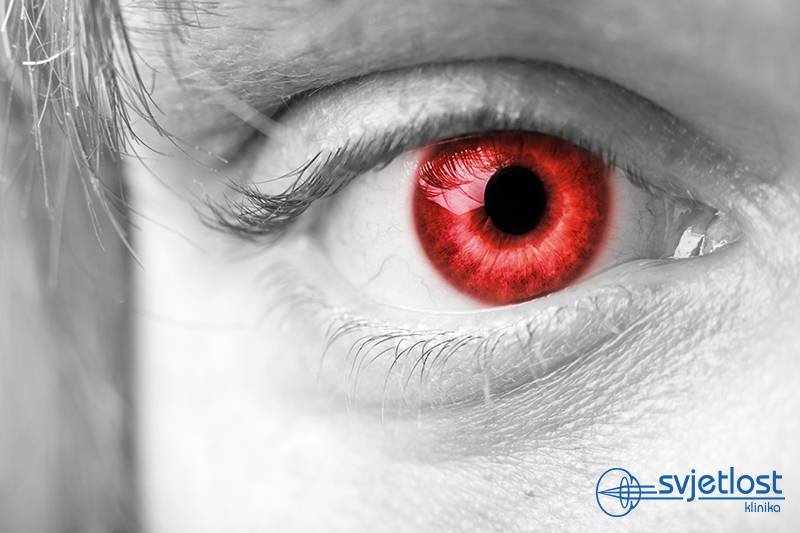 Asymmetric “red eye” effect at an adult age can be a sign of many eye diseases, most commonly cataract, (age blur of natural eye lens) retinal disease or deep eye bleeding.

Did you record a photo at night or under low light with the flash on? As a result, did you notice how your "red eyes" look like a vampire’s on a recorded photo? Why is this aesthetically undesirable phenomenon occurring?

When taking a photo with a flash, the light enters the eye faster than the pupil tends to narrow, reflecting from the bottom of the eye and going back through the pupil. The camera will record that specific light as a red pupil. Blood gives a red color. That is red blood cells that middle eye tunica – choroid is full of, which coats the bottom of the eye, together with retina.

Although there are many ways of avoiding red reflex on the pictures or simply editing it via popular ‘photoshop’ techniques, sometimes photography alone can be an alarm for serious eye disease.

In diseased eyes, unlike normal, red reflection, a white or yellow reflection may appear. The medical term for it is leukocoria, or translated, white pupil.

When it comes to children, the occurrence of such abnormal photo reflex may be a sign of serious eye diseases, such as retinoblastoma – the most common ocular tumour in childhood, as well as inborn cataract or Coat’s disease, which can result in vision loss. The absence of a desirable, red-eye effect is always a sign to preventively visit an ophthalmologist.

Asymmetric “red eye” effect at an adult age can be a sign of many eye diseases, most commonly cataract, (age blur of natural eye lens) retinal disease or deep eye bleeding.

Red reflexes are more common with people who have light eye color (blue, green) due to the genetically reduced amount of dark pigment – melanin. Melanin in black or brown eyed people absorbs most of the flashlight.

Although the "red eye" effect can interfere with photo editing, it may sometimes be very useful in detecting the condition and the illness of the eye we were not aware of.