Cassandra Gava, another Hollywood actress, had eye surgery at the Svjetlost Eye Clinic 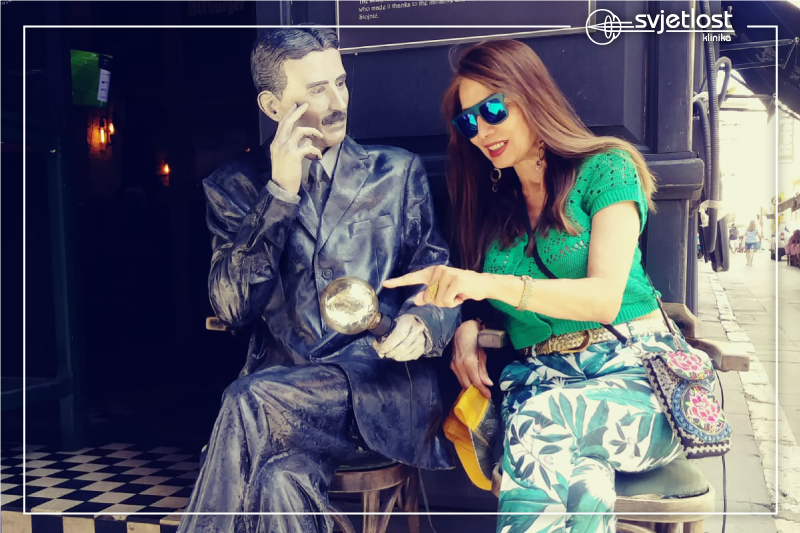 Whole my life I have been suffering due to the bad vision and now less than 24 hours after the surgery, I can see items I was not able to see...
Zagreb, 26. August 2019. – Cassandra Gava (60), performed and participated in the production of more than 50 Hollywood movies. She has decided to solve vision problems at the University Eye Hospital Svjetlost in Zagreb after Armand Assante, Franco Nero, and Ivana Trump.

Mrs. Gava who arrived to Zagreb directly from Sarajevo Film Festival decided to put a trust with her vision in professor Gabrić and his team of professionals. During the filming with Franco Nero last year she encountered Armand Assante at the dinner who when asked about the purpose of being in Zagreb shared information about eye surgery at the Svjetlost Eye Clinic. Due to the other obligations, Mrs. Gava at that time was not able to do the surgery.

"I have called Franco and Armand numerously asking about every single detail, how was it, pain level, did they see straight after... You know I am a coward and still cannot believe I did it! Whole my life I have been suffering due to the bad vision and now less than 24 hours after the surgery, I can see items I was not able to see... It truly helped to know that my good friend Ivana Trump had a surgery lead by experienced hands of prof. Nikica Gabrić who has performed the surgery along with his expert team, so I have decided there is no room for waiting.. It was way easier than I thought, I cannot even recall surgery, it was that easy.."

"Personally for me and for our Clinic(s) this is an extreme honor, Mrs. Gava, and Mrs. Trump, gentlemen's Nero and Assante, as well as other world-famous figures who could have conducted eye surgery anywhere, decided to come to tiny Croatia to do surgery. This is the proof about our level of technology and service is equal and above one in the USA!" - emphasized prof. Nikica Gabric who has conducted Mrs. Gave's surgery in less than 14 minutes. She was implanted with multifocal intraocular lens solving near, medium-range, and distance vision as well as astigmatism. It is specially produced lens by Zeiss company, made by order for Mrs. Gavu.

"Honestly, to tell you the truth I was scared and I was too scared to open my eyes in fear of lacking great sight. But professor Gabrić managed to convince me to open my eyes and I was instantly able to read ad within 200 meter... I have never had a vision like this before." -said Gava who is staying in Zagreb for 3 days before going back to Los Angeles.
More Information