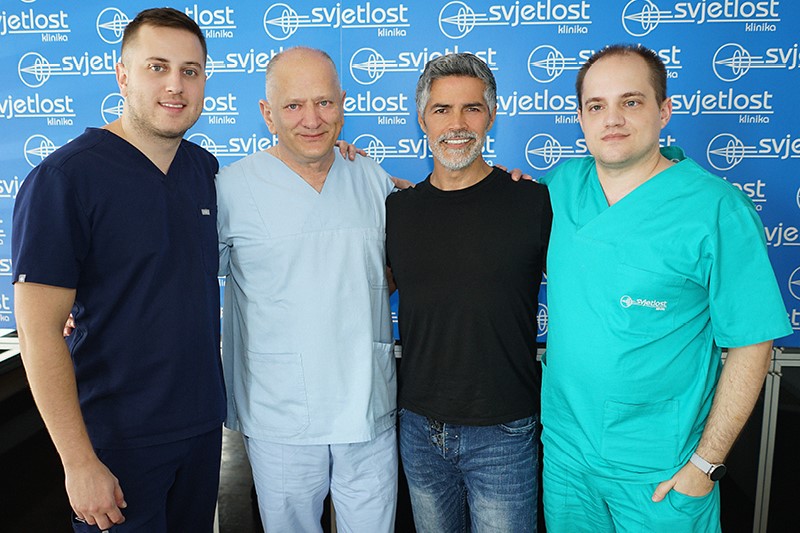 Esai Morales, an American actor who has starred in more than 100 films and series, caught a short break between filming scenes with Tom Cruise on the new sequels to the Mission Impossible franchise and came to Zagreb for surgery.

Mr. Morales, although he looks much younger, is 59 years old and has been struggling with reading diopters for a long time. The team of Eye Clinic Svjetlost solved his problem in 10 minutes and restored his perfect vision at all distances.

“My job is very demanding, apart from physical fitness I have to be ready to read hundreds of pages of scripts. Unfortunately despite my best efforts my eyes have become the weakest link! I wore 3 pairs of reading glasses each because I was constantly losing them. My good friend Armand Assante told me that he solved his problem in Zagreb. After him, Cassandra Gava, Franco Nero and Tim Roth additionally convinced me that Zagreb, the Eye Clinic Svjetlost, is the best address in the world for me. I came at noon and already at four o'clock in the afternoon I had surgery. What surprised me the most was that I had already seen reading on my cell phone in the evening, and the next morning I saw it at all distances like when I was 25 years old! Nothing on my body betrayed my age, except when I would try to read so I squinted and moved objects to catch what it says… Professor Gabrić assured me in just a few minutes of our conversation that his expertise and energy was the right choice for my eyes. The operation was painless and lasted less than five minutes per eye. My only regret is that I didn't do it earlier! ” Esai Morales stated.

The team from Eye Clinic Svjetlost performed bilateral implantation of Johnson & Johnson Synergy lenses to Mr. Moreals. Synergy is the latest generation of lenses that solve the problem of reading diopters. It is also the lens that Professor Gabrić chose for his operation last year.
Svjetlost is the world's leading institution for the installation of Synergy lenses, which is confirmed by the status of the Educational Center for Johnson & Johnson for Advanced Ophthalmology Technologies, only the second such center in the whole of Europe.