Do you know how we remove dioptre and astigmatism with laser? 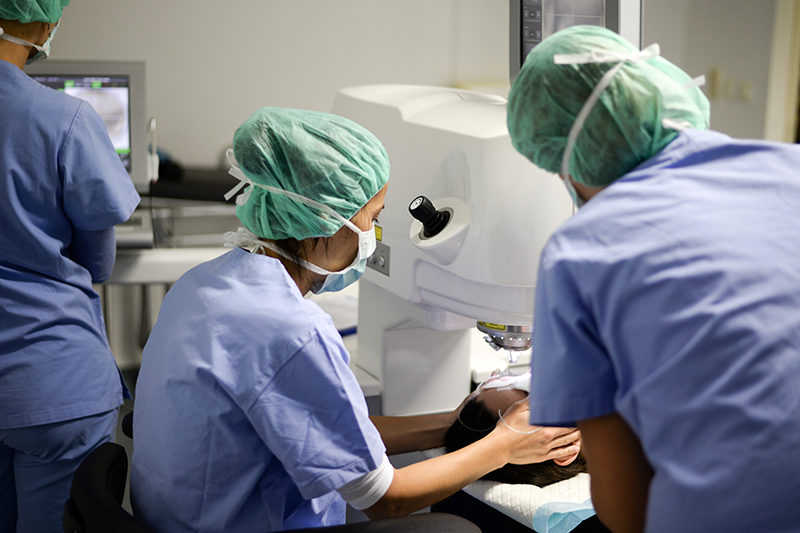 We remove the dioptre and astigmatism so that the laser beam remodels front surface of the eye and corrects refraction error in order to solve you from dependence on glasses or lenses.
The World Health Organization has recently included dioptres into the category of disability – as a response to the needs of many people with dioptres, who always felt that way. Fortunately, today it is possible to solve this problem in quick efficient and safe manner.

Every year there is an increase in the number of people who decide to solve the problem of dioptres by laser surgery. The truth is the number of people with dioptre increases so it is often talked about the "epidemic" of short-sightedness, and since recently scientists have clarified the reasons why this is happening. It is estimated that more than 2 million people are being treated annually. With that being said, time laser visual correction goes under one of the most performed procedures performed at the patient's request with the highest degree of satisfaction (as much as 97% according to the US Food and Drug Administration).

Refractive errors most often are caused by a greater or smaller eyeball length. In the short-sightedness, due to the greater elongation of the eyeball, the light rays are refracted over the cornea and the lens and they cut off in front of our centre of vision (yellow spots), while in the far-sightedness they are refracted at the imagined point behind the yellow spot. In first case, we need a minus dioptre to correct our blurred vision at a distance. In the case of farsightedness, we do not see the near proximity, but the distance is not the best either. Short sight or minus dioptre is much more common. Astigmatism or cylinders are related to the irregular curvature of the cornea in different directions, which results in an unclear image of objects (usually overlapping images). All refractive errors are correctable with the laser under one go.

More than 90% of people with dioptres are good candidates for a laser.

To access laser dioptre removal, it is important to make a comprehensive overview in order to determine if you are a good candidate for laser dioptre removal. The conditions are that you are of age of 18 years old and above with dioptre that has not changed for at least a year with healthy cornea and eyes and that the cornea is thick enough. Why? Dioptres and astigmatism are removed with a laser beam that remodels the front surface of the eye and corrects the refractive error in order to resolve the addiction of glasses or lenses.

LASIK is the most commonly performed dioptre correction method today and is considered to be the world's gold standard for comparing the success of all other methods. The method is performed in two-step with drops anaesthesia. The first step involves the creation of a cornea flap, and another remodelling the cornea with excimer lasers. After remodelling the cornea flap is returned to the natural position of the cornea, where in a few minutes it sticks, and in a few hours heals without the use of stitches and bandages it enables quick and comfortable recovery of eyes and visual acuity. Today, two methods for forming the flap (corneal lids) are available. LASIK methods, either using microkeratome or femtosecond lasers, can correct a wide range of dioptres: short-sightedness to -10.00, far-sightedness to +6.00, and astigmatism to ± 6.00.

What to expect during and after the procedure?

The surgical procedure itself lasts for several minutes and is performed in local, drip anaesthesia. Eyeball brackets keep an eye open during surgery to prevent blinking, and the laser is computer-controlled. Most of the time, both eyes are working simultaneously. For most patients, full visual acuity is achieved even within 24 hours after the procedure! Patients can work three days after the LASIK method, and 7 days after the PRK method. For the first few days, the drops of antibiotic drops are required in combination with artificial tears, and later only artificial tears as needed.