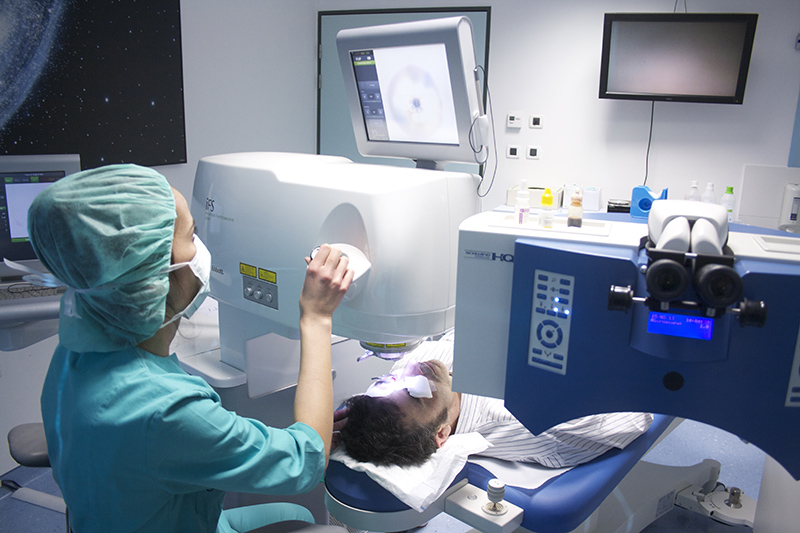 Femtosecond method using IntraLase laser to create flaps and Schwind Amaris laser to remodel cornea is considered the best combination in laser dioptre removal nowadays.
Laser surgery has never been this fast and painless, and with the development of technology it is of a better quality today and safer procedure all adults with healthy cornea and stable dioptre ranging from -10 to +6 and ± 6 cylinders can undergo.

The value, as well as the success of this procedure, is proven by the fact that it is the most executed and worlds most demanding operation. Over the last 30 years, more than 50 million people have gotten rid of dioptres with laser treatments.

Over the past two decades, for as long as dioptric laser surgery technology is present in this part of Europe, Eye Clinic Svjetlost has been a leader in technological equipment and experience. Since the first laser removal of dioptre in this area, which was carried out in 1998 by our prof. Nikica Gabric until this day, several generations of lasers that made the evolution in operative methods have showed up.

Femtosecond lasers introduced a new step in the safety of operations by replacing the use of an electronic micronaire to create a cornea flap in the first stage of the procedure. From 5 types of such lasers, the Clinic Svjetlost has operational experience with four.

Today at ophthalmic clinics in Zagreb and Split we exclusively use the latest 150 kHz IntraLase laser, which is also the most widely used femtosecond laser in the world. Due to the precision of the laser cut, the cornea switches are more regular in shape and have more predictable thickness compared to those made with electronic micronaires.

The advantage of the femtosecond method is particularly pronounced in high dioptres, astigmatisms, and thin cornea. Surgical complications have been eliminated, the possibility of "dry eye" has been reduced, and better healing has been enabled.

Dioptre is removed by an excimer laser

In the second phase of the procedure, regardless of the way the flap is created, dioptre is removed by the excimer laser. Since recently, the Svjetlost Clinic in Split has been equipped with the Schwind Amaris 750s, which is considered to be the most advanced on the market confirmed by the many years of experience of the Zagreb Clinic Svjetlost.

In addition to having the highest speed of work important for accuracy of correction, it also has the smallest beam/ray important for quality and smoothness of the corneal surface formation. In addition, the special feature of this laser model is its 6D eye tracking system during the laser-induced operation in milliseconds and provides a programmed result.

dr. Maja Bohač, Head of the Refractive Surgery Department at the Svjetlost Clinic